If you're a regular reader, you know that almost all of my posts are upbeat and fun; however, let me assure you that my journals are not all glitter, roses and butterflies!  Some of my best journaling is born of anger and of me visiting the "dark side" after being provoked by something out of my control.

One such recent event resulted in one of my favorite journaling spreads.  It makes me laugh when I look at it because I remember how blindly angry I was, and it amuses me because that blind anger almost always stems from "the small stuff". 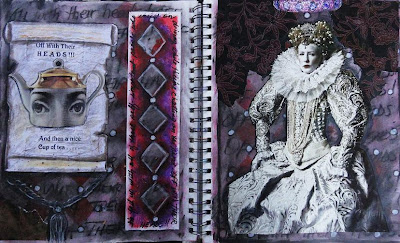 One of my pet peeves is people who aren't paying attention when they're driving.  You know the ones I'm talking about - they're putting on make-up, eating Whoppers, digging around in the glove box, or (the one that REALLY trips my trigger), talking on their cell phone. 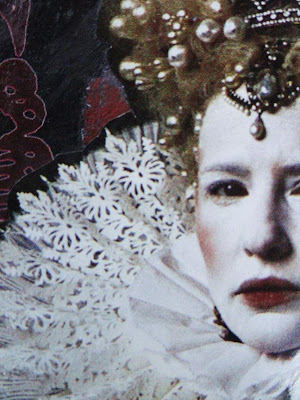 I had initially saved this Vogue magazine image because I thought the costume and photography were spectacular (my apologies for not having the photographer/model/design information), and I thought something similar would make a great Halloween costume.  As I looked through my images to create my pages, her expression was perfect for what I was feeling.  I generally alter magazine images, but I couldn't think of altering this beauty. 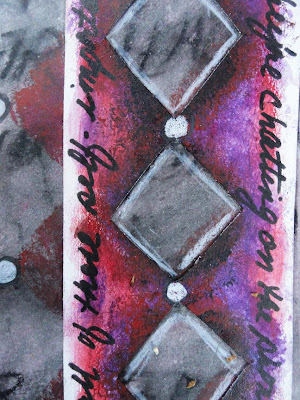 So what set me off?  I hate grocery shopping.  I've got my list, I know where everything is, and I'm on a mission.  Ten minutes and I'll be out there. But, NO! There are many elderly couples standing in the middle of the isles staring blankly at shelves, and young mothers with gaggles of children running wild. I seriously want to plow through all of them with my cart, but I smile warmly as I make my way to the cashier.  I finally escape the store only to be confronted by three, almost naked, teenage girls sauntering  through the parking lot in front of me.  They are busy texting on their phones, not paying attention to their surroundings, and I am doing my best not to run them over with my car. 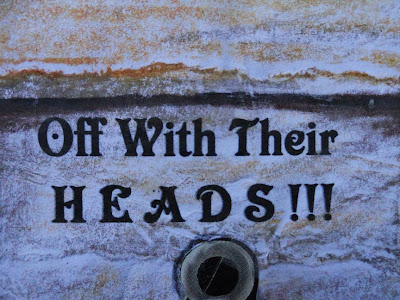 They shout something (thankfully) inaudible, but my temper is still in check as I exit the lot.  The proverbial straw that broke me?  I'm the first one in line at the traffic light. My light is red and I'm waiting to turn right.  I'm sitting at a major intersection, traffic is rolling through from my left, there's someone across the street who looks like they will turn right but I have no clue as they aren't using a directional.  Then it happens.

I hear someone behind me honking.  I look in my rear view mirror.  It's a woman in an SUV, and she's laughing and chatting on her cell phone.  She sees me glaring at her, looks at the light, and realizes she is honking at me for no reason.  She begins waving frantically at me as if to say, "Oh, my bad.  I'm wrong.  So sorry." 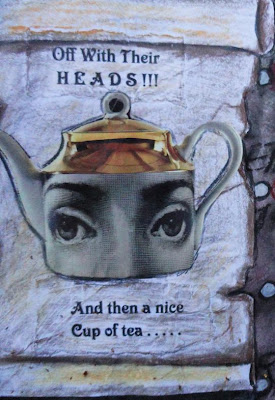 But it's too late.  I've HAD IT! I'm in a RAGE, and for a split second I imagine myself shutting off the car, getting out, and walking right back to her window.  I'm Tony Montana and I'm out of control.  "You wanna play games? Okay, I play with you; come on. Okay. You wanna play rough? Okay. Say hello to my little friend."  But I'm not Tony Montana, and I have no little friend, so instead, I turn right as my light changes to green.

So that's how this "angry" journal spread was born.  I arrived safely at home, put away the groceries, and had a nice giant "mug-o-coffee".  It was a couple days before I actually created this spread, so I could finally see the humor in the fact that I had become so angry over something so trivial.

Creating bright, beautiful, positive journaling pages is what we like to do best, but don't forget about the value of exploring your "dark side" and journaling about the things that make YOU angry.  It's a good way to release all that negative energy, and you won't find yourself journaling from a jail cell.  Whatever you're doing today, remember to "Celebrate, LOVE, and Create!"
Posted by An'Angelia Thompson at 10:27 AM 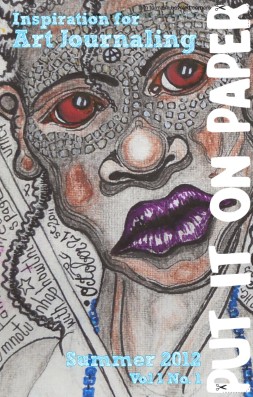